I don’t feel like writing anything, it seems like so much work for me to get it onto paper. Life gets in the way sometimes and I lose the motivation to do the things I enjoy doing. I am not going to bore you with the why not and how come, it runs to deep but maybe one day it will surface and rear it’s ugly head then I will deal with it. Until then I will try to write about the things I feel strongly about and maybe a few more of my memories……….

When I was growing up I loved animals. It didn’t matter what kind of animal it was, I always found beauty in all things. I would find a “stray” animal, dog or cat, and bring it home and beg my mom and dad to let me keep it. A few times I succeeded by hiding the animal until it was to late to take it away to the pound like so many of the poor creatures did while I was at school for the day. I have always felt driven to take care of those who could not or cannot take care of themselves or who depend on someone for the kindness and love they crave. 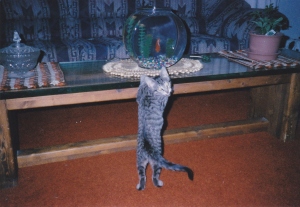 I remember one such small little creature who at no fault of his own was put into a situation that demanded someone care for him or he would die, all alone, cold, and possibly afraid. My daughter saw a cat get hit by a car and she passed away from her injuries. The tell tale signs were there that she had given birth not long ago and so the race was on to try and find her babies if it was not already to late. She did find the babies, all six of them huddled together in the insulation of an abandoned mobile home. It was sadly to late for 3 of the babies and the rest of them didn’t look well at all. I volunteered to take one of these babies as my daughter could not take care of all of them herself. He came to me so tiny and fragile and his eyes were not yet opened, he was about a week old. He had the most pitiful little cry so hence he was christened with the name Squeaker. He was a beautiful grey stripped tabby. My “mothering” instinct kicked in and I was hell bent on saving this little kitten’s life……..I went to the pet store and bought bottles and formula and I fed Squeaker warm milk and took care of his needs like any good mother would.

When he finally did open his eyes I guess he thought I was his mother. He followed me around the house and got into all kinds of mischief. But he was alive and I was so thankful that he pulled through his miserable start in life. When he was about 3 months old he got sick and couldn’t pass water so off to the vet we went. I was told that if he didn’t have surgery he would die so I paid to have his plumbing fixed and it was a success.

Squeaker was my baby and I loved that kitten like none I had loved before. A few months later our lives as we knew it changed. My hubby passed away late one night in September 1999. I was lying on the bed with Lee trying to comfort him as he passed and there was Squeaker lying next to him with me. He was such a caring little guy, my Squeaker. We ended up having to move and all my animals moved with me. Then other things happened and our life changed again. I went away to Maryland for a month and while I was away my sister told me she would take care of my little Squeaker for me. I didn’t trust anyone with that little guy but had to trust her as she assured me it would be okay. So she took him home with her. Upon my return and having had to move again I called my sister to see if Squeaker was okay. She told me that she was very sorry but he had run away….I was devastated. To this day I miss my little Squeaker…..I don’t know if I believe the run away part but I will never know what happened to my little kitty who I saved from an untimely death then let him down by trusting someone else with his well-being. I made a promise to myself and any future animals that it would never happen again……after all you are the best person to care for your animals and they would be very sad if you were not around.

It is very strange and not the first time someone has promised me that they would look after my pet only to have it disappear or run away in my absence….but that is a story for another day!!!!

So till next time from the Duskweald,

One thought on “Squeaker”